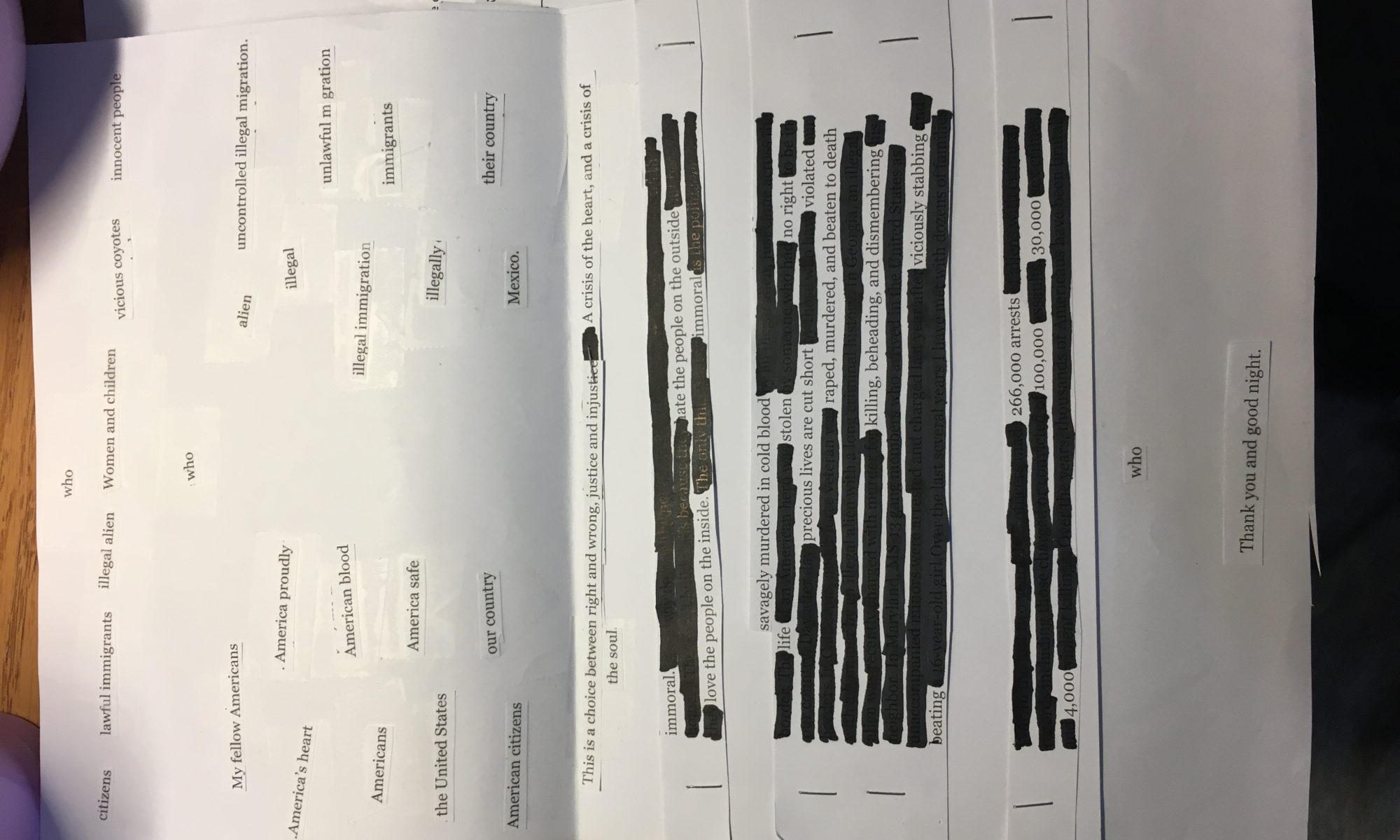 I created my found poem from a transcript of Donald Trump’s speech about building a wall at the southern border, between the U.S. and Mexico. While I was creating this found poem, I knew that I wanted to focus on what was happening to the people, instead of the actual physical creation of a border wall. I immediately cut out all parts of the speech that had to do with the construction of the border wall and its cost. Then, I took all of the instances where Trump referred to people, both illegal immigrants and american citizens, and collected them all together. Since I was trying to focus on people, trying to emphasize the fact that we are all people, I started the poem with the word “who.” I wanted to ask a question. I tried to imply, who are we? I then put a list of different words used to describe people, trying to group them all together. But in the section after that, I asked “who” again. This time, I separated words and phrases where illegal immigrants were referred to and where Americans and America was referred to. This was intended to show the separation that is already there, without the border wall. We are all people, but we are separate.

In the second section of my found poem, I took phrases and paragraphs and blacked out certain parts of them. Again, I was trying to focus on the similarity, on the fact that we are all people. I cut out any references to who was being referred to in these sections. The “266,000 arrests” or the “killing, beheading, and dismembering” are all events that have happened, but we do not know to who. Did it happen to the immigrants? Or to the citizens? Is it more justifiable if it happened to immigrants? Is it worse if it happens to citizens? Again, I ask “Who”. After that, I ended the poem with the phrase that ends all presidential speeches: “Thank you and good night.” This felt like a powerful closing. It was powerful enough for the president to use, than it was powerful enough for me to close the poem with. Thank you and good night.

Ghosts can be found in every chapter of The Woman Warrior. They permeate all parts of the book. These ghosts have many different meanings and take many different forms. They can appear as malevolent spirits, such as the ‘Sitting Ghost’ that Brave Orchid encounters in her years at the To Keung School of Midwifery. Kingston writes that “This Sitting Ghost has many wide black mouths. It is dangerous. It is real” (74). Yet there are other ghosts that seem to do no harm, that just exist, such as “Taxi Ghosts, Bus Ghosts, Police Ghosts, Fire Ghosts. Meter Reader Ghosts, Tree Trimming Ghosts, Five-and-Dime Ghosts” (97). Kingston says that “America has been full of machines and ghosts…” (96). These ghosts that are mentioned so many times have both a literal and a metaphorical meaning throughout the story. They represent the confusion Kingston feels about her life, never knowing if the stories that her mother tells her are reality or fiction. She cannot tell what parts of her past are true memories or a ‘ghost’ of a memory, a fiction she created. The ghosts also literally represent people that surround them in their daily lives. To Brave Orchid and her children, the ghosts are the people in America who are not Chinese, who live a life filled with traditions and culture they do not understand. But China is also a ghost story to Kingston. When her mother talks to her about returning to China, Kingston thinks “I am to return to China where I have never been” (76). Though her mother “funnelled China into their ears,” China is a foreign land she has never been to, another story in which she does not know which parts are true and which are fantasy.  Though the ghosts change through the perspective of different characters, they tend to represent things that are unknown.

In the chapter “At the Western Palace,” Brave Orchid brings her sister, Moon Orchid, to the United States to live with her family. Moon Orchid’s husband has remarried an American woman. Brave Orchid believes that her sister should go to her husband and retake what is rightfully hers. When the estranged husband first sees Moon Orchid and Brave Orchid, he refers to them as “grandmothers” and thinks that “these women had such awful faces” (152). His inability to recognize them separates them from himself. There is a divide between the two worlds these different characters inhabit and that turns them all into ghosts to each other. Kingston writes “Her husband looked like one of the ghosts passing the car windows, and she must look like a ghost from China. They had indeed entered the land of ghosts, and they had become ghosts” (153). America is the land of ghosts, filled with the ‘white ghosts’ that are repeatedly mentioned by both the narrator and her mother. Moon Orchid’s husband has been here so long, and becomes so ingrained in the American way of life that he has become synonymous with these ‘white ghosts.’ China has now become a ghost land to him, similar to how it is for the narrator, and so he sees these two old women as ghosts from a life that once belonged to him but no longer does. This is extremely powerful due to the fact that Brave Orchid has been surrounded by ghosts her whole life, and has worked hard to defeat many of them. She now lives her life in a land full of ghosts that she must deal with daily. Her move to this new place and her inability to accept american customs has led to her becoming a ghost in all the places she has known. She is a ghost floating between worlds, with no real home. She has become something that she learned about, and worked against, her whole life.

Hi! My name is Melissa O’Leary and I am a freshman adolescent education major from Kings Park, Long Island. I love english very very much and I am very excited for this class. A fun fact about me is that I am running cross-country for Cortland!